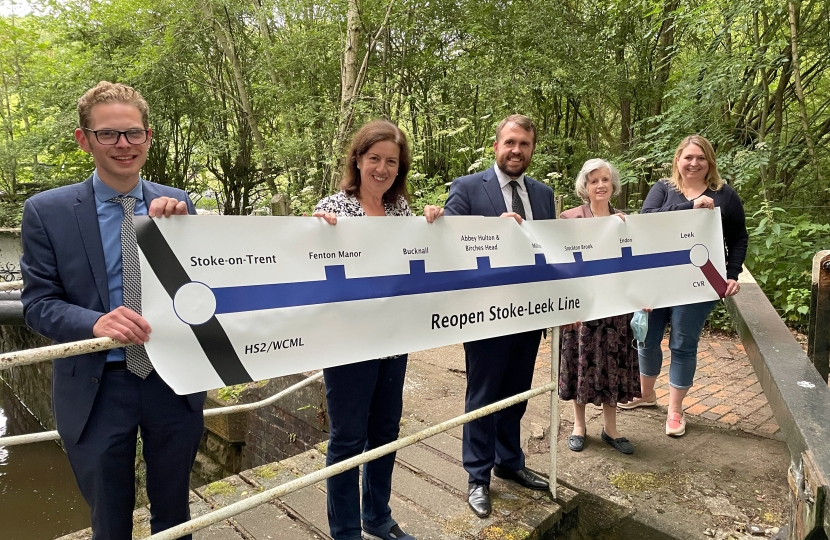 As your MP, as well as doing my very best to help with the many personal cases you contact me about, I also receive many letters and emails concerning local projects and campaigns. One campaign that has certainly generated a great deal of interest locally is the proposal to reopen the Leek to Stoke railway line.

Together with Staffordshire Moorlands District Council, Stoke-on-Trent City Council and neighbouring Members of Parliament, we have submitted a bid to the Department for Transport as to why the line should reopen, and the economic benefits it will bring across the Moorlands and North Staffordshire.

This proposal was submitted as part of the Restoring Your Railway Fund which was launched by the Department for Transport last year.

We have had many meetings with Ministers to make sure they know the potential benefits and have raised this in the House of Commons on many occasions and on Friday I was pleased to be joined by Cllr Sybil Ralphs MBE and other nearby MPs in Stockton Brook to continue with our campaign.

I have been lobbying for the reopening the line for a long time. Having a clean, green, reliable train service into the City would benefit so many people in the Moorlands who travel for work and leisure. It would also allow many more to visit our beautiful countryside and attractions without adding to the pressure on our roads and has the potential to take freight off the roads too, benefitting those who live along main roads.

As we visited the line near the canal at the border of the Staffordshire Moorlands and Stoke-on-Trent, people told us how much they would like to see the trains return.  I will do all I can to make sure that we have the best chance possible.

As we regain more of our freedoms, and with the end of the school year, many people are thinking about a summer holiday.  We have seen more visitors to the Moorlands over the pandemic and I know well the stress that has put on residents and public amenities and facilities.  I am working with several organisations to find ways to help people who visit the Moorlands to do so responsibly and with sensitivity to those that live and work here.