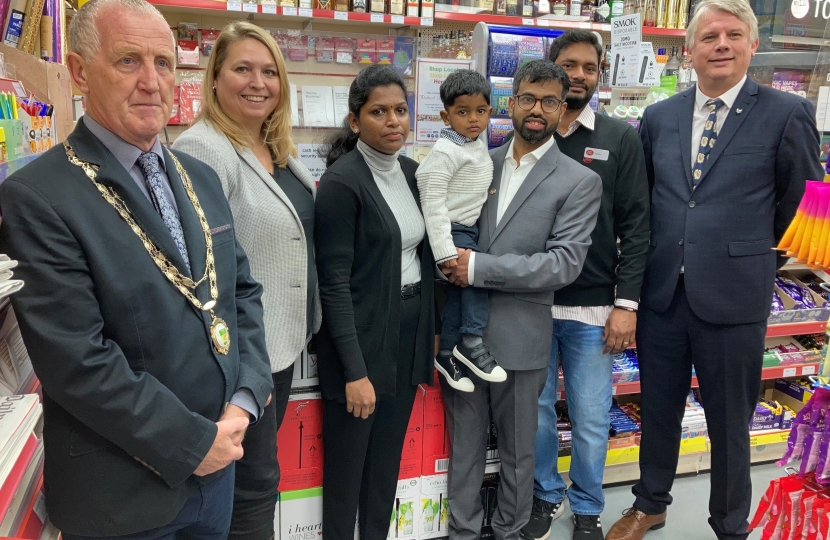 Postmaster Pratheesh Shanmuganathan decided to improve and expand his shop after a van deliberately drove through the store front in March 2021. With a positive attitude, Mr Shanmuganathan saw this as an opportunity to make improvements he had in mind. Now, the Caverswall Post Office and Village Store is open to serve customers and the local community.

“I was delighted to perform the official opening of the Caverswall Post Office and Village Store, that has opened bigger and better than before the ram raid. It’s so heart-warming to hear everything that Postmaster Pratheesh Shanmuganathan has done for Caverswall and how the community showed their appreciation for this hardworking, community-minded shopkeeper in his time of need.”

Mr Shanmuganathan kept his Post Office and shop open throughout the pandemic, offering a free delivery service for the elderly that he ran before and after his shop opening times. In June 2015, Mr Shanmuganathan brought Post Office services back to Caverswall and has served the local community since, for which we are all grateful.

When his shop was deliberately damaged, the community rallied around him with regular customer Charlotte Sims and Cllr Ross Ward setting up a Just Giving page that raised around £7000 to help Mr Shanmuganathan rebuild his business.

“These have been difficult times setting up a business, the pandemic and the ram raid, but I didn’t want to let my community down, so I thought how can I turn around this set back, so I decided that this was a good time to enlarge my premises. I now have space for frozen goods and more retail to make it fully into a convenience store.

“I really appreciate how the community rallied round to support me. That was very kind and very unexpected. I was very impressed with how much money they raised in such a short amount of time. This official opening is now the time to celebrate with the community all the improvements made to the shop.”

As Co-Chair of the All Party Parliamentary Group on Human Trafficking & Modern Slavery I was really pleased to join HRH Princess Eugenie and Lord Vernon Coaker at the Human Trafficking Foundation’s Online Awards Ceremony and announce the winners for the Outstanding Contribution awards.