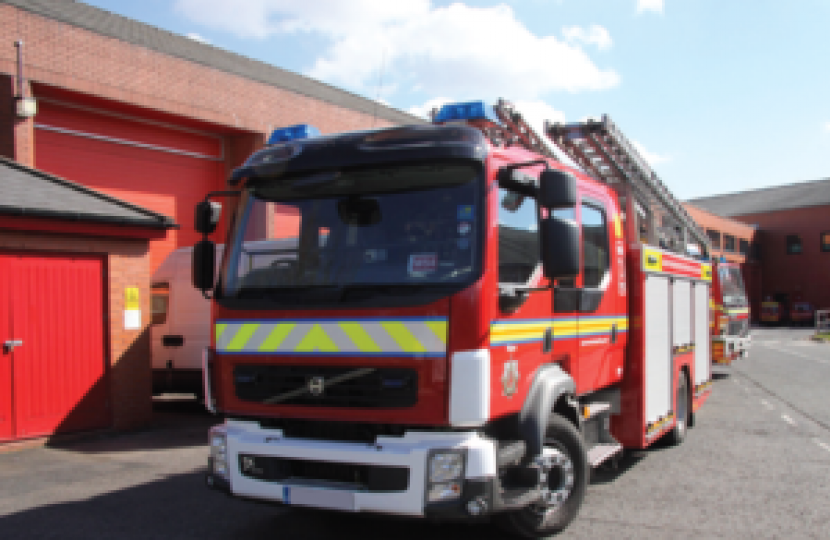 The Fire Brigades Union plans to strike between 12 midday and 4pm on Wednesday 25th September and Karen made clear her disappointment.

She said:  “I know that firefighters in Staffordshire Moorlands do a fantastic job, but the decision by the FBU to strike is entirely unnecessary and avoidable. Ministers have been negotiating for two years to reach a fair agreement. As a result firefighters have improved terms and one of the most generous public service pensions available.

“Staffordshire County Council has put contingency plans in place and Staffordshire Fire Service has been preparing for several weeks but everyone should take extra care tomorrow afternoon when the strike is on. It's a shame that the firefighters we all rely on have decided on this course.”

Nationally, a firefighter who earns £29,000, and retires after a full career aged 60, will get a £19,000 a year pension, rising to £26,000 with the state pension.  To get the same pension from a private scheme firefighters would have to contribute twice as much.

It is a misconception that the pension reforms are introducing a national fitness standard. In fact, firefighter fitness remains a local fire and rescue authority matter.

Staffordshire County Council has taken steps to ensure that employees in council buildings, together with schools and other services such as care homes are aware and prepared for the proposed industrial action.

Philip Atkins, Staffordshire County Council’s Leader, confirmed that the fire service has made plans and said he is confident they will be well prepared.

But he also said: “However, there will be significantly fewer crews and fire engines available, so it is essential we are all extra vigilant and take extra care to ensure these crews can deal with real 999 emergencies.

“As a county council, we have emergency plans in place and the most important thing is that we all remain safe by taking a little extra care at home, in work and on our roads tomorrow afternoon.”

Ahead of the strike, managers of county council premises and schools have been asked to check their fire safety plans including:

• No practice fire drills in the afternoon

During the four hour strike emergency calls will be monitored and managed by a senior fire officer who will be based in fire control during the industrial action.

However, the fire service says it will not be business as usual and people are being asked to only dial 999 if they are reporting a genuine emergency #takeextracare